As part of our Vision Therapy Success Stories series, we interviewed Bridgette Olinghouse to share the story of her daughter, Emilia.  At age 3, they noticed Emilia had an eye turn and she was eventually diagnosed with amblyopia. Emilia tried glasses, patching, and vision therapy but eventually it was determined she could not progress without surgery. Due to their location, Emilia had little access to vision therapy. Luckily their optometrist was able to provide home vision therapy options, including Vivid Vision, to help Emilia progress after her surgery.

Four year old Emilia was just a little clumsy. Her mother, Bridgette, mentioned this concern to her pediatrician who dismissed it as “normal for some children.” Bridgette says,“We also noticed her left eye would sometimes wander when she was tired. I would mention this during her routine checkups, but no one ever recommended an eye exam. I am the type of mother who would have definitely taken my child to an optometrist if it had been suggested.”

Emilia woke up one morning and her left eye was turned in severely toward her nose.

They thought everything was fine, but things changed literally overnight. “Emilia woke up one morning and her left eye was turned in severely toward her nose. She was diagnosed by a local optometrist with amblyopia (lazy eye) and esotropia (crossed eye). She was prescribed glasses which helped for a month, but the eye turn returned. We went back to that optometrist and under their direction we began patching her good eye for 2 hours a day while doing activities at home,” she shared.

“Eventually, the optometrist said that Emilia was physically fine and could live with the eye turn, but we didn’t want that for our daughter, so we saw an ophthalmologist who recommended eye muscle surgery. We scheduled it and then canceled it because we weren’t at peace with that decision,” Bridgette shared.

Like many parents, Bridgette went online to research alternatives to invasive surgery. Bridgette found an optometrist who provided vision therapy as an option to treat Emilia’s amblyopia and esotropia. Although it required a two-hour drive from home, they went to see Dr. Joanna Carter in Medford, Oregon.“Her eye exam was way more in depth than anything Emilia or I had experienced before.” Dr. Carter’s exam found that Emilia had no stereopsis and had double vision. She had 20/30 acuity in her left eye and 20/50 acuity in her right eye at distance. Weekly in-office vision therapy was recommended, but with the long drive they decided to go in every other week accompanied by several days of home vision therapy.

“We did the drive for six months and Emilia’s eye turn was a little bit better. She was able to keep her eyes straight for short periods of time,” Bridgette said. Eventually, the drive would take a toll on them and Dr. Carter referred them to Dr. Hackett who was actually closer for them. Dr. Carter and Dr. Hackett rarely refer patients for eye muscle surgery, but they recommended it in Emilia’s case due to her plateauing in vision therapy. Her eye turn was persisting and she started to complain about the double vision.

Emilia had surgery on April 23, 2018. “We went to the appointment feeling devastated. During an initial consultation in Portland, the ophthalmologist told us that a successful surgical outcome was to make the two eyes appear straight. Period.” While cosmetically this sounded great, Bridgette said, “I kept wondering about the other aspects of Emilia’s vision.” Going through vision therapy they had learned that there was much more to vision than eye alignment.

After surgery, Emilia’s eyes looked straight, as expected. But, Bridgette’s concerns were accurate. Emilia’s follow up eye examination showed that she had no convergence, no 3D vision, and no improvement in visual acuity. “At that point we went back to see Dr. Carter and Emilia became her very first patient to use Vivid Vision,” Bridgette shared. Emilia was prescribed Vivid Vision Home along with other vision therapy exercises at home and only saw Dr. Carter once a month.

Little did they know, this was a major turning point for Emilia. “The timing of her surgery could not have been better because it coincided with Dr. Carter introducing Vivid Vision in her practice. It is so hard for families who live far away from services like vision therapy to have options, but Emilia really liked playing the Vivid Vision games like Pepper Picker. It wasn’t a struggle to get her to do it every day,” she shared. 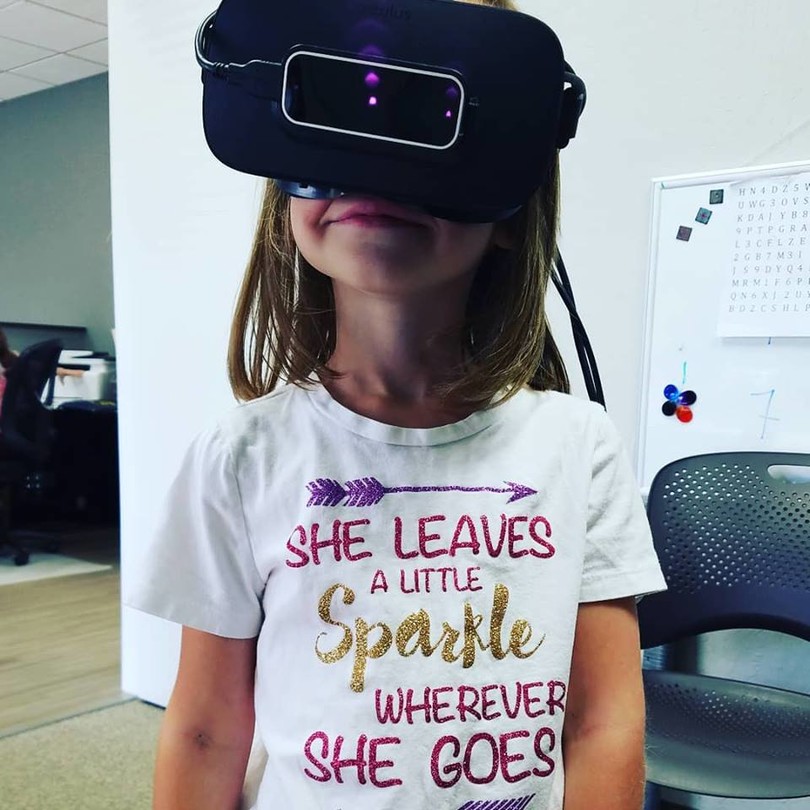 In only one month, Emilia started seeing in 3D.

After four weeks of using Vivid Vision Emilia had depth perception for the first time ever and was no longer suppressing her left eye. “There was a test at Dr. Carter’s office that shows butterflies to those with normal 3D vision and random patterns for those who lacked it. She had never noticed the butterflies before, but at her two month checkup, she saw them!” Bridgette said they were thrilled to see the improvements month after month.

Emilia graduated from vision therapy almost a year later on April 8, 2019. She has 20/20 vision with glasses along with normal convergence, eye teaming, tracking, peripheral vision, and 3D vision. “She can now ride a bike and just started gymnastics two weeks ago,” Bridgette shared excitedly.  “Her balance is better and there are so many physical changes in her like simply running and playing. She is doing so well in school.”

I asked Dr. Carter what do we need to do now? She said all we needed to do at this point was simple. Just let her be a kid!

“I asked Dr. Carter what we need to do now; were there follow up exercises needed? She said she would check on Emilia every few months, but all we needed to do at this point was simple. Just let her be a kid!” Vivid Vision has been an answer to prayer for our family and we are able to do it from home with less traveling back and forth.

Over 474 Vivid Vision Providers prescribe virtual reality alongside patching and vision therapy to treat your lazy eye. Sign up through our doctor locator to see if Vivid Vision is right for you.