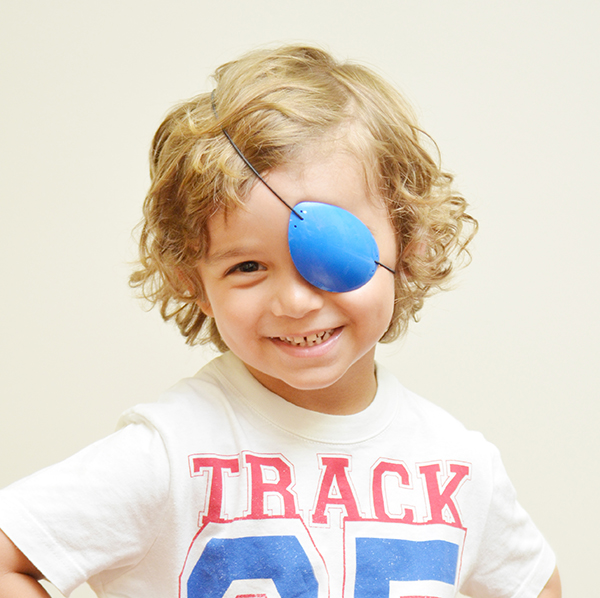 The medical eye patch (patching therapy) is the oldest and most common treatment for amblyopia. Covering, or occluding, the strong eye with an eye patch forces the brain to use the weak eye. This method of treatment is referred to as penalization therapy. It penalizes the better-seeing eye and forces the brain to use and depend on the weak eye. The ultimate goal is to improve the clarity of vision and encourage the use of both eyes together.

Patching therapy has the benefit of being time-tested. It has improved the vision of millions of patients with a lazy eye for the last thousand years (seriously! the first documentation of patching therapy is from 900 A.D.). But, patching therapy is not without its downfalls. Children often dread wearing it, and parents often struggle forcing their child to continue to use the patch.

The very first step to lazy eye therapy is the prescription of lenses if indicated. After prescribing a new pair of glasses and wearing these glasses for a few weeks, eye patching is frequently the next step in treating lazy eye (amblyopia). Patching is often considered the first-line of treatment for lazy eye, and many patients have tried this if diagnosed with amblyopia.

There are several alternatives and adjunct therapies to wearing the eye patch. Vision therapy exercises are often done along with patching. These activities often focus on helping the patient learn to use both eyes together. Virtual reality treatments are also often used as a companion treatment to the patch.

How Well Does Eye Patching Work?

Eye patch therapy was investigated by the Pediatric Eye Disease Investigator Group (PEDIG). PEDIG is, a National Institute of Health-funded group made up of optometrists, ophthalmologists, and vision scientists that study binocular vision disorders and treatments.

The PEDIG group has published a series of trials on amblyopia treatment study trials that are referred to as ATS. These were a set of US government-funded clinical trials aimed to understand the pros and cons of the most common binocular vision disorders and their treatments, with a goal of providing quality, evidence-based recommendations for care of patients with conditions such as lazy eye. The findings are open to public access. The following is a brief summary of the PEDIG group's findings:

Glasses correction is very important for patients with a lazy eye or an eye turn. The improvement in visual acuity (clarity of vision) usually occurred within the first 16 to 18 weeks after optical correction.

It was long thought that more patching was better for lazy eye. For mild and moderate lazy eye, the PEDIG group discovered that 2 hours of daily patching is as effective as 6 hours of patching. For severe lazy eye, 6 hours was an effective amount of patching. All groups included one hour of near activities.

Atropine is an eye drop that intentionally dilates the eyes and relaxes the eye's ability to focus (accommodate). Atropine is occasionally used in the best-seeing eye to intentionally blur the patient's vision. This is another form of penalization therapy. One percent (1%) atropine used in the better-seeing eye was determined to be similar to in effect as 2 and 6 hours of patching. These studies also showed that although mostly safe, some side effects with atropine use can occur.

In summary, the Pediatric Eye Disease Investigator Group (PEDIG) has conducted several randomized amblyopia treatment trials over the past several years. Results have shown that spectacles alone are a powerful treatment for amblyopia; patching is superior to spectacles alone; initiating fewer hours of prescribed patching seems to be as effective as traditional treatment; patching is effective in older children, particularly if they have not previously been treated; atropine is as effective as patching after six months, and weekend atropine is equally effective as daily atropine.

The patch can be more affordable than alternatives which require more doctor visits. Many parents end up spending money on a few different kinds of patches, so they aren't always as cheap as they might seem in the long run.

Downsides to the Eye Patch

Patching is a good first-line of treatment, but compliance is often an issue as the patch can be uncomfortable to wear, and frustrating for the patient to be limited to blurry vision while wearing it. The other effects are not as obvious at first. Primarily, patching therapy fails to help promote use of both eyes together.

Patching is the most well-studied treatment for amblyopia, and it often does work to improve the clarity of vision. But it doesn't work for every child, and there seems to be a limit to when patching therapy is effective. The PEDIG clinicians found that resolution of amblyopia, defined as visual acuity for the amblyopic eye within 1 line of the good eye occurred in only 25–33% of cases and around 25% of cases have some degree of recurrence during the first year after stopping treatment.

Patching forces a patient to use their weak, worse-seeing eye while performing activities. Asking a child to wear an eye patch and go to school would be rather difficult. As such, most patching is done at home. This can make doing activities such as homework difficult.

The patch itself can be physically uncomfortable as well, making it even more difficult to keep on during the long periods that are required.

Eye Patching is a Commitment that Takes Time

Patch treatment takes time. Many doctors will recommend between two to six hours per day, often for months or years. The PEDIG studies suggest that most improvements occur between four and six months but improvements can continue after that amount of time.

The concept of each type of eye patch is to prevent the use of the better-seeing eye and to force the patient to use the vision of the weaker eye. There are a few pros and cons to each type of eye patch material. No matter which type you choose, keep in mind that they will all get worn out and need regular replacement.

Modern eye patches come in all kinds of shapes, sizes, and types

This is the standard most people think of when they hear the words, "eye patch". Often completely black to help block light, they sometimes come in a variety of shapes and patterns. Not the most comfortable, and not the cheapest, but are chosen because they are a good middle ground.

Disposable eye patches are like big band-aids: they have a paper backing that peels off so you can apply them to the tissues surrounding the eye. They often have trouble sticking on active young children for long periods of time and the cost can add up. They can be more comfortable and convenient compared to cloth patches.

Silk eye patches are just like cloth eye patches. They are frequently a bit more comfortable but often are more expensive.

The magnitude of VA improvement found at the mostly 4- to 6-month primary outcome examinations is not the maximum benefit expected to be achieved for all participants, but instead the maximum length of time that the prescribed treatment regimens could be maintained before investigators would insist on a change of treatment in cases of poor outcome; in many cases, VA can improve further with continued treatment.