There are six extraocular muscles that control all of the movement of the eye. These muscles are the superior rectus, inferior rectus, lateral rectus, medial rectus, superior oblique, and inferior oblique. The muscles of the eye are designed to stabilize and move both eyes. Special nervous centers located throughout the brain and brainstem interact with each muscle pair (right and left) to coordinate precise movements of the eyes with limited conscious input.

Take a look at this image of the eye muscles. Each muscle has a primary and a secondary function. The image below is of the right eye (as if you were looking directly at the patient). 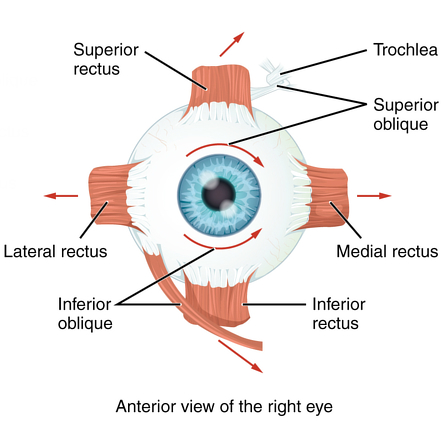 The superior rectus inserts at the anterior (front) portion of the eye, and its origin is behind the eye on the common ring tendon. Its primary function is to elevate the eye, and it has a mild secondary function of adduction and intorsion.

The inferior rectus inserts at the anterior (front) portion of the eye, and its origin is behind the eye on the common ring tendon. Its primary function is to depress the eye, and it has a mild secondary function of adduction and extorsion.

The lateral rectus inserts at the anterior (front) portion of the eye, and its origin is behind the eye on the greater wing of the sphenoid bone as well as the common ring tendon. Its primary function is to abduct the eye, and it has no secondary function.

The superior oblique is unique. It inserts on the superior, lateral (ear-side), and posterior (back) of the eye. The anatomical origin is behind the eye on the lesser wing of the sphenoid bone, but the superior oblique muscle acts a pully, and loops back trough a connective tissue sling called the trochlea. Even though it is positioned above the eye, its unique use of the trochlea gives it a primary function is to intort the eye, and secondary functions of depression and abduction.

The inferior oblique is also. It inserts on the inferior, posterior, lateral portion of the eye. Its origin is on the medial (middle) maxillary bone. Its primary function is extorsion, and its secondary functions are elevation and abduction.

How are the Eye Muscles Controlled?

The muscles that control eye movements are interesting. They use a larger supply of blood relative to their skeletal muscle counterparts, and only a few muscle fibers comprise a motor unit. This allows the cranial nerves responsible for coordinating eye movements to have precise control of the eyes.

What is Eye Muscle Surgery?

Eye muscle surgery is commonly referred to as strabismus surgery. In some types of constant or even intermittent eye turns (strabismus), early surgery may be prescribed by an eye surgeon to increase the chance of returning or developing normal binocular vision.

Eye alignment surgery can restore normal appearance and is recognized as reconstructive surgery. There are many other benefits beyond restoring a normal appearance. Improved depth perception or complete reattainment of binocular vision, improved visual fields, eliminating or reducing double vision and improved social experiences since eye contact is hugely important in human communication and emotional responses.

It is essential to discuss the goals and expectations of the surgery with an ophthalmologist. During strabismus surgery, one or more of the eye muscles are moved to improve eye alignment. Strabismus surgery is usually performed as an outpatient procedure and does not require an overnight hospital stay.