The visual system includes both the eyes and the brain. Light enters your eye where it hits the retina, which triggers light receptors to send electrical signals through your optic nerve, which travel to the back of your brain where the first stages of visual perception take place.

The brain then sends increasingly filtered signals forwards through the brain until you can "see" them and take action. Here is a look at a few ways the brain plays an important part in our visual system.

The main function of the superior colliculus is to physically redirect the sensory structures of the head toward stimuli of interest. This behavior termed orienting, allows the eyes, ears, and other organs to gather detailed information about external stimuli. Redirecting the head also points the mouth, so the superior colliculus may act in concert with systems that control food gathering and protective behaviors. In humans and other primates, orienting movements may include head movements, but are primarily accomplished by redirecting the eyes, using fast eye movements called saccades. In other species, head movements predominate and may be accompanied by orienting movements of the pinna and vibrissae.

The rostral pole of the superior colliculus may also play a role in smooth pursuit eye movements.

The ganglion cells are the last link in the chain of neurons in the retina. This chain begins in each retina's 125 million photoreceptors, which gather information and channel it, via a small number of synaptic connections, to the retina's 1 million ganglion cells. Retinal ganglion cells process visual information that begins as light entering the eye and transmits it to the brain via their axons, which are long fibers that make up the optic nerve.

The retinal ganglion cells from the nasal half of each retina send their axons to the contralateral half-brain whereas the ganglion cells from the temporal hemiretinae project ipsilaterally. As a result of this arrangement, the left brain sees the right visual hemifield and the right brain the left visual hemifield; the neural signals produced by any one object in each eye end up in the same location in the brain.

The LGN is considered a first-order thalamic nucleus on the basis of its close relationship with the retina. Each LGN layer receives input from only one eye. The LGN layers are stacked on top of each other like a set of pancakes. There is layer specialization such that small, medium, and large cells are segregated into different layers and carry different types of visual messages to the primary visual cortex. The retina and the visual cortex, the main inputs to the LGN, both innervate the LGN visuotopically.

Certain classes of LGN neurons in the rodent are selective for both orientation and direction of motion.

Vieth- Muller/Horopter: A circle that runs through the nodal point of each eye and touches the point at which the two eyes fixate. When eyes fixate on points along a curve in the horizontal visual plane for which the vergence remains constant, this curve is the larger arc of a circle connecting the eyes' rotation centers. This isovergence circle is known as the Vieth-Müller circle.

The points not lying on the horopter are imaged by disparate retinal elements and are seen as double. This diplopia is called physiological diplopia. When the disparity object is inside of Panum's area of fusion, the image is fused and we have a single percept of the object. The Panum’s Fusion Area is defined as a narrow band around the horopter which the objects stimulation on one retina such that any point in it will fuse with a single point on the other retina. 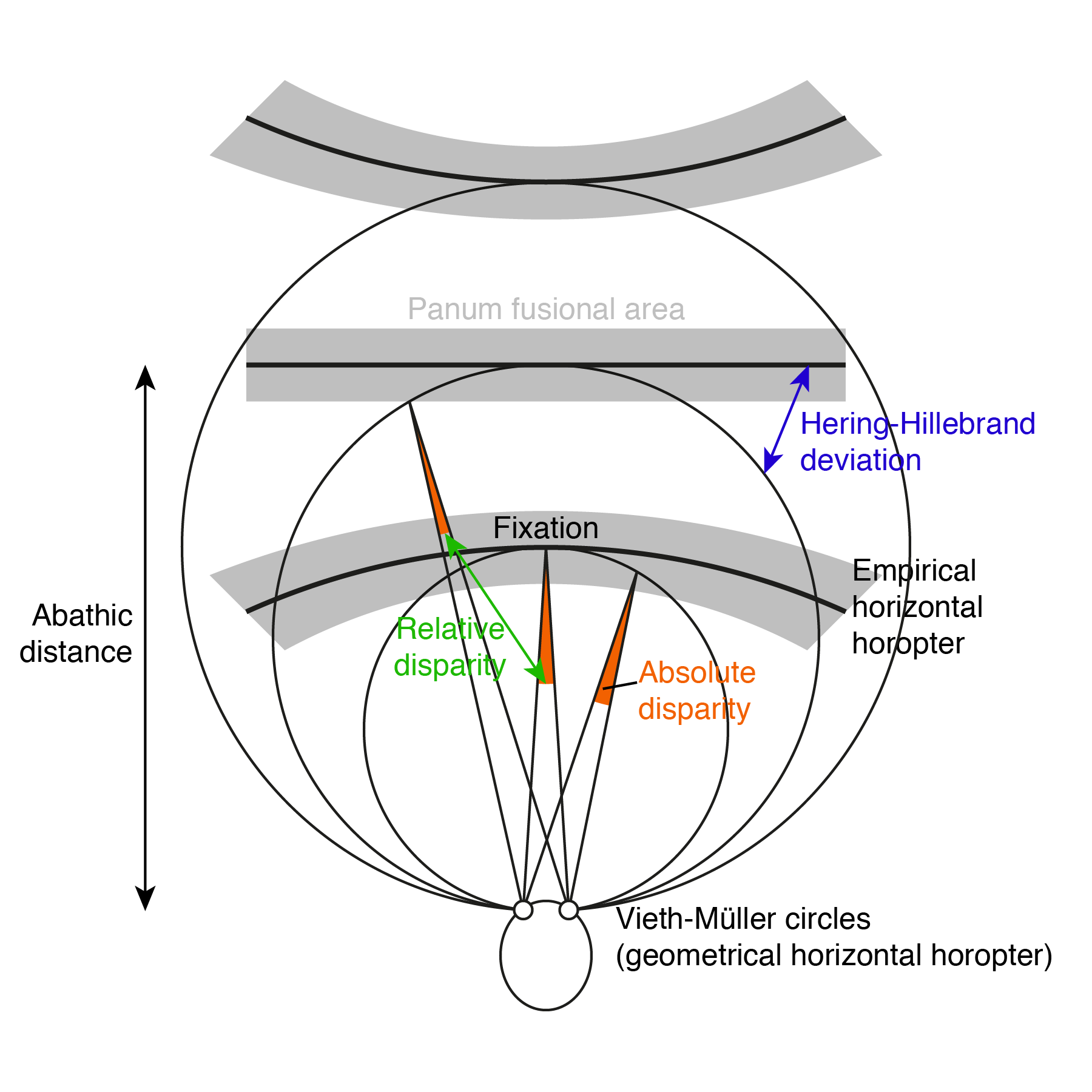 Over 476 Vivid Vision Providers prescribe virtual reality alongside patching and vision therapy to treat your lazy eye. Sign up through our doctor locator to see if Vivid Vision is right for you.